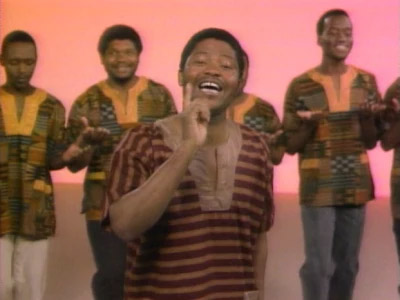 We’re saddened to learn that Joseph Shabalala, the lead singer for the South African a cappella group Ladysmith Black Mambazo, has passed away.

Ladysmith Black Mambazo is best known for their work with Paul Simon, notably in the songs “Diamonds on the Soles of Her Shoes” and “Homeless”.  Their low harmonies and steady rhythms are beautiful and hypnotic, so it’s no wonder that Paul Simon and Sesame Street both took interest in working with them.

On the Muppet side, Ladysmith Black Mambazo has several credits, so let’s look at them all.  Here they are in the celebrity montage version of “Put Down the Duckie”:

And here they are again in Sesame Street‘s 25th anniversary special singing “Sing”:

The group performed the African Alphabet one more time, this time as themselves along with Paul Simon:

Finally, here’s Shabalala himself talking about the power of music in the lesser-known Henson series The Ghost of Faffner Hall:

Incredible stuff, right?  Thanks to Joseph Shabalala and Ladysmith Black Mambazo for so many memorable moments.

Click here to help us remember Joseph Shabalala on the ToughPigs forum!

Join or renew now for 18 Months of Membership! — UNIMA-USA

Happy 2020 Oscars from The Muppets!