The Return of The Jerx

First… do you think this Valentine is too obscure? 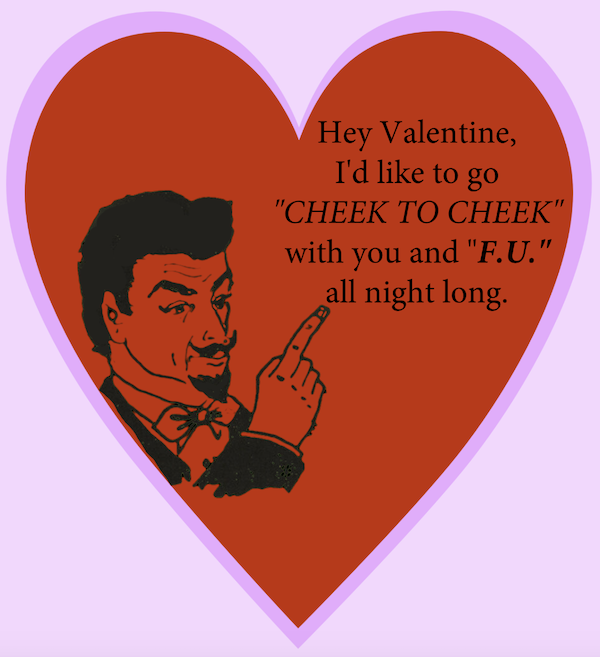 While most people (close enough to 100%) are familiar with magician U.F. Grant, probably only 90% of the population would recognize that illustration as being from the cover of his book, Illusion Secrets I. And of that group, maybe 85% would recognize him as the guy who marketed the Cheek to Cheek deck originally. So probably only, like, 3/4s of people will really understand it.

And furthermore, how many people are familiar with the cheek-to-cheek sexual position where both people get on their hand’s and knees, smoosh their buttocks together, and the male threads his penis back betwixt his legs to enter the female?

Is it even worth me sending this out to every woman in my contact list in hopes of finding a willing lover for tonight if only, like, half of them will truly understand the reference? And of that half, it’s probably only going to be about 80% who are really super turned on by it. So I don’t know if it’s worth the effort. Eh, I’ll give it a shot.

Gonna try and get some “bodies in orbit” tonight, if you know what I’m saying.

(The tricks in this book really do sound like sexual positions. Although “Self-Rise” is likely the only one you’re familiar with.) 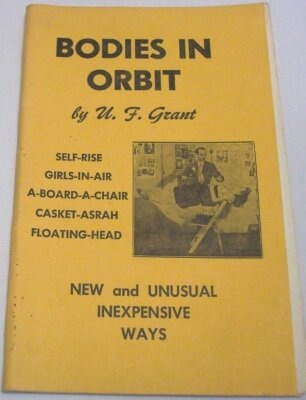 Heyyyyyyyy all! The bitch is back!

It’s good to be writing you again and I hope you’re all having a dope-ass start to your year. Mine has been great so far. The new book came out and everyone was creaming their jeans over it. And after wringing the cream from said jeans, many people went out and tried the material and reported back to me with their experiences (you can read some of that feedback in the Winter X-Comm newsletter which came out at the end of January).

With the book release and new season support emails going out, there have been a lot of emails going back and forth. It’s very possible I’ve mis-filed an email or two. If you were expecting to hear back from me about something in the past few weeks and you haven’t, get back in touch.

As I mentioned, the email went out to 2019 supporters earlier this month to see if they wanted to do another season. We easily reached the threshold required to do a 2020 season, so that’s why we’re here again. There are a few full supporter slots that weren’t claimed and those will be available on Wednesday the 19th at noon, New York time.

There aren’t many slots. If you’re interested, make sure you check back on that day.

A year ago I wrote a post titled Delineation. “Things are going to change around here,” I said. And then not a goddamn thing changed.

The changes I mentioned last year actually will go into effect this year. The site content is going to be fun stuff, timely stuff, or ideas that can be stated succinctly. Some posts may just be a couple sentences, or a single image.

The stuff that is a little more valuable or fleshed out will appear in the newsletter to supporters which is going from four times a year to 10 times a year.

Then, of course, the physical publications will include the content that has proven to be most useful to me over time.

So what type of stuff will you see here:

And by “dumb tricks,” I don’t necessarily mean bad tricks. I’m going through a phase where if a trick is just a moment of impossibility that I can’t find a way to build off of in some way, it just feels dumb to me. It feels especially dumb in social situations. But my mind still comes up with these sorts of tricks, so this will be my repository for them.

As I said in a previous post, I want to try and funnel content into the outlets that feel most appropriate for them. I want the stuff on the site to feel breezy and easily digestible. The stuff that requires a little more focused attention will go in the newsletter, so you can carve out some time once a month when you’re in the mood for that. And then the books are for the fully polished ideas and material.

Posting will be sporadic for the rest of this month.

In March I will start a new posting schedule that will look like this:

The 1st through the 20th of each month there will post every day.

Nope. Every single day, including weekends. (Weekends will probably be non-magic-related posts.)

Then I’ll be off the rest of the month and the newsletter will be released to supporters at the end of the month. And that pattern will continue through December.

I need to have something that marks the end of the previous era of the Jerx and the start of the new one. So Monday’s post will be the true delineation mark between the two.

Over the weekend I’m going to work on coming up with the dumbest piece-of-garbage post you can imagine. Then I’m going to try and get dumber and dumber until I’ve condensed it down to a perfect nugget of worthlessness. The post won’t be interesting, provocative, or funny. The only noteworthy thing about it will be how spectacularly bad it is. It will be a post so shitty that some of you will remove this site from your bookmarks.

That will set a new benchmark for stupidity on this site which will readjust your expectations of what to expect (and then leave you pleasantly surprised with the relative quality of the posts which will follow it).

For the next 72 hours I will be sitting at my workbench, tirelessly honing the epitome of an awful magic blog post in order to lower the bar. See it here Monday. 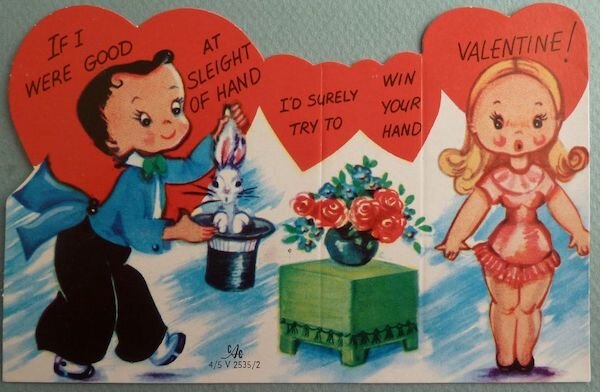 Holidays in Vegas with Murray Sawchuck — The Magic Word