Houdini Milk Can and Iron Box at auction March 6 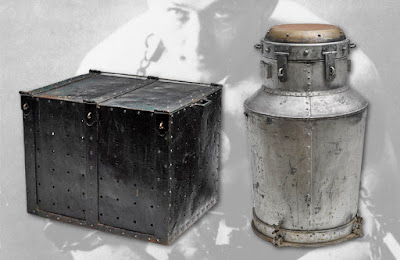 The famous Iron Box seen in Houdini (1953) and a Milk Can that just might be the can Houdini used for his Double Fold Death Defying Mystery will be auctioned by Bonhams in New York on March 6, 2020. Both these props come with a fair amount of mystery attached, but the folks at Bonhams have done their homework, as you can see by the detailed auction descriptions below. 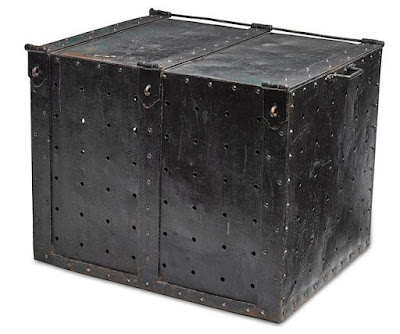 Constructed of steel with a solid lid designed to be padlocked to the body, small holes on each side, and a sliding “trap door” on the bottom through which the illusionist can make his escape, this crate boasts an amazing pedigree and history. While on exhibit at the Houdini Magical Hall of Fame, the piece was identified as having been used by Houdini in his underwater escape trick, though the museum claimed it was only used twice, as the weight of the steel made it far too dangerous. We have not been able to confirm its use in performance by Houdini, unfortunately. All of the other references to Houdini’s underwater trick, both in actual waterways and onstage in the Hippodrome tank, refer to the illusionist being nailed into wooden crates or packing crates (though some are reported to have been reinforced with steel or lead).

We can say with confidence that it was part of Houdini’s estate (it appears on an inventory listing of property sold by Bess Houdini to Joseph Dunninger shortly after Houdini’s death).

Joseph “The Amazing” Dunninger was a popular “mentalist” who specialized in illusions and debunking mediums, also a passion of Houdini’s. He was reportedly close to Houdini and his wife Bess, and purchased a quantity of property from the widow after Houdini’s sudden death in 1926. As early as 1930, Dunninger published an advertisement to sell props and other material in The Linking Ring, the official publication of the International Brotherhood of Magicians, offering the steel crate for sale:

In 1938, the iron box again appears in a Dunninger ad in the same publication offering items for sale:

The 1938 ad also mentions the Houdini Trunk of all Nations illusion and the Houdini Lattice Cabinet (with Houdini’s name mentioned in all caps) both of which made their way to the Houdini Museum in Niagara Falls along with the steel trunk in the 1960s.

The steel crate does appear in the 1953 film Houdini starring Tony Curtis. The Amazing Dunninger was hired as creative consultant on the film, and many items from his Houdini collection made their way into the final cut, including the collection of handcuffs sold in these rooms on December 5, 2018 (lot 244). The crate is clearly visible in the overboard escape sequence in the film, the perforations on the steel crate making for a dramatic scene as the water pours out in torrents while the crate is pulled up from the bottom of the river. 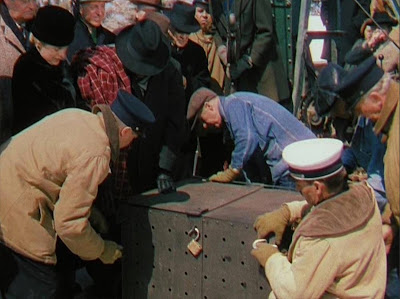 An unusual theory has been floated about the origin of this steel crate, inspired by a blind item in a 1939 issue of the magic periodical The Jinx, edited and published by Theodore Annemann from October 1934 to December 1941 (thanks to mymagicuncle.blogspot.com for the clue). For some backstory, Houdini and fellow illusionist Harry Blackstone, Sr. nursed a bitter feud in the early part of the 20th century which apparently dates from the introduction of the overboard box escape. Houdini always accused Blackstone of copying him, but the truth may be the opposite. From issue #68, November 25, 1939, page 468, Annemann writes:

“Years ago there were two rival conjurors, one specializing in escape work, the other making a feature of it but not in entirety. Around 1907 there was published in Popular Mechanics an escape from a barrel after being submersed in water. By an amateur magician it was first known (as far as can be found) escape to be made under water. The barrel, its halves held together with bayonet catches, was meant to be practically kicked apart under water and let sing. H.B. then built a metal box with a sliding panel unlocked with a forked pick. He refused to sell this to H.H. so the latter did the ‘overboard’ box with a packing case instead. Later , H.B., seeing the psychological effect of a locally built case over a special iron box, stored the thing away in N.Y. with other illusions. Time marches on. H.B. now stands accused of under water escape larceny by H.H. We can allow that in regards to the packing case but not in priority to the general effect itself. H.B. needs the iron box to prove his point. It has disappeared! Time marches on some more. H.H. winds up a spectacular life. Into the picture comes J.D. who acquires some of the H.H. stage properties. In the cellar he finds a large iron box which no one knows anything about. Suspecting a trap, J.D. toils and finally locates a sliding panel. H.B. still has the pick for the box he found gone from the storehouse. J.D. has an iron box he found in the H.H. cellar … on the sidelines, we suggest that H.B. and J.D. patch up their feud or declare a three hour truce while they check the finis to a truly rugged individualistic story of magicians at work and play.”

To summarize, Annemann suggests that the present steel box was actually made by Blackstone, not Houdini. Houdini wanted to buy it from Harry Blackstone, and when the latter refused, Houdini created his own underwater escape using wooden crate boxes built on site (which Blackstone then copied). An intriguing theory: is this the actual first “overboard box,” designed by Blackstone and suppressed by Houdini?

Provenance: Estate of Harry Houdini. Sold by Bess Houdini to the Amazing Dunninger [Joseph Dunninger, 1892-1975], c.1927. Loaned by Dunninger to Paramount for the production of the 1953 film Houdini, in which it appears as the “underwater crate.” Sold by the Amazing Dunninger to Henry Muller in 1967. On exhibition at the Houdini Magical Hall of Fame in Niagara Falls, Canada 1968-1997. Sold to Tom Thayer, 1997. Sold to the present owners, 1999. 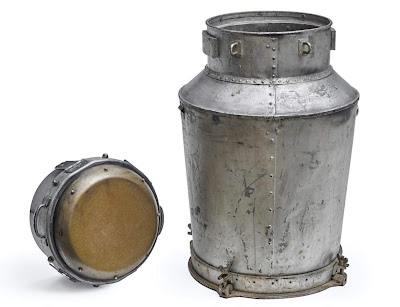 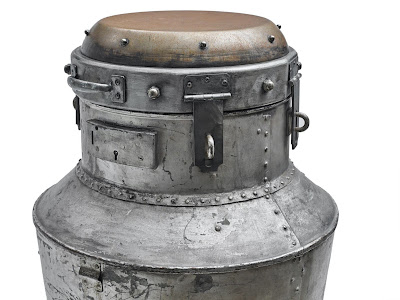 White metal vessel, 35 inches high by 26 inches in diameter at widest, bottom 22 inches in diameter, welded “milk jug” with tapered neck, 3 (of 4) wing nut screws at bottom at north, south and east, and two faux hasps at either side of the neck. WITH: trick lid featuring domed top and four padlock hasps connecting to vessel (lid supplied later).

For nearly two decades, this vessel remained on display at the Houdini Magical Hall of Fame in Niagara Falls, Canada as an example of the illusionist’s famous “milk can” escape, in which he was locked inside a metal can which was then filled with water, giving him only a short time in which to escape before drowning. The blogspot Wild About Houdini theorizes that this can is actually the mate to the “Double Fold Death Defying Mystery” box sold at auction in July of 2014 at Potter & Potter in Chicago, which is plausible given the unique characteristics of this can.

The Double Fold Death Defying Water Mystery, introduced c.1911, took the milk can escape and ratcheted up the drama. In the earlier escape, Houdini was padlocked into a large milk can which was then filled with water, from which he would escape while hidden behind a screen (the milk cans had “trick lids” or necks that could only be opened from inside, allowing him to escape). In the double fold mystery, the milk can was hidden inside a larger wooden crate, making the escape that much more difficult.

The strongest argument that this milk can is the Double Fold can is the hasp on the neck. Measuring 3 1/2 by 5 inches, the hasps, which appear on either side, appear to be decorative only. In an image located in the Harry Ransom Center’s Harry Houdini Papers titled “Milk Can and Box used in the Double Fold Death Defying Water Mystery” (container 13.17), the hasp is clearly visible on the neck of the can sitting inside the box. Additionally, no other Houdini milk can appears to have this decorative hasp. The hasp can also be matched to images of the can as it sits on display at the Houdini Magical Hall of Fame.

Another piece of evidence: the diameter of the can’s bottom is 22 inches, which will just fit inside the circular inset at the interior bottom of the Double Fold box sold in 2014. And finally, the height of the current can sans supplied lid is 35 inches, which, if the original short lid were added, would just fit inside the 38 1/2 inch ceiling of the Double Fold box.

Though Hardeen likely acquired the Double Fold Box and its can at the same time, at some point the two were separated. The box was sold by Hardeen to Jack Lawain of Monmouth, Illinois, who used it in performance himself, before offering it at auction in 2014. The can was sold by Hardeen to Sidney Radner, who then placed it on exhibition at the Houdini Hall of Fame.

Provenance: Estate of Harry Houdini to his brother, the Magician Hardeen; sold by Hardeen (along with other items of Houdini material) to Sidney Radner; on exhibit at the Houdini Hall of Fame, 1968-1997; sold by Radner to Tom Thayer, 1997. Sold by Thayer to the present owner.

In case it isn’t clear, the lid on the can is not the original lid, nor does it resemble the original (which was said to have been “lost” at the Houdini Magical Hall of Fame). The last owner had this lid made. And while the neck hasp referred to in the Ransom Center’s Double Fold photo is indeed the same type of hasp as seen on this can, the can itself is not an exact match.

You might recall this post from 2016 in which I reported that these were displayed in a coin shop in Santa Monica and treated with a fair amount of indignity (customers actually sat on the iron box while waiting to be served). I’m very happy to see these treasures liberated at last. Here’s hoping they will land in a good home.

How Magicians Create A Winning Atmosphere For Magic